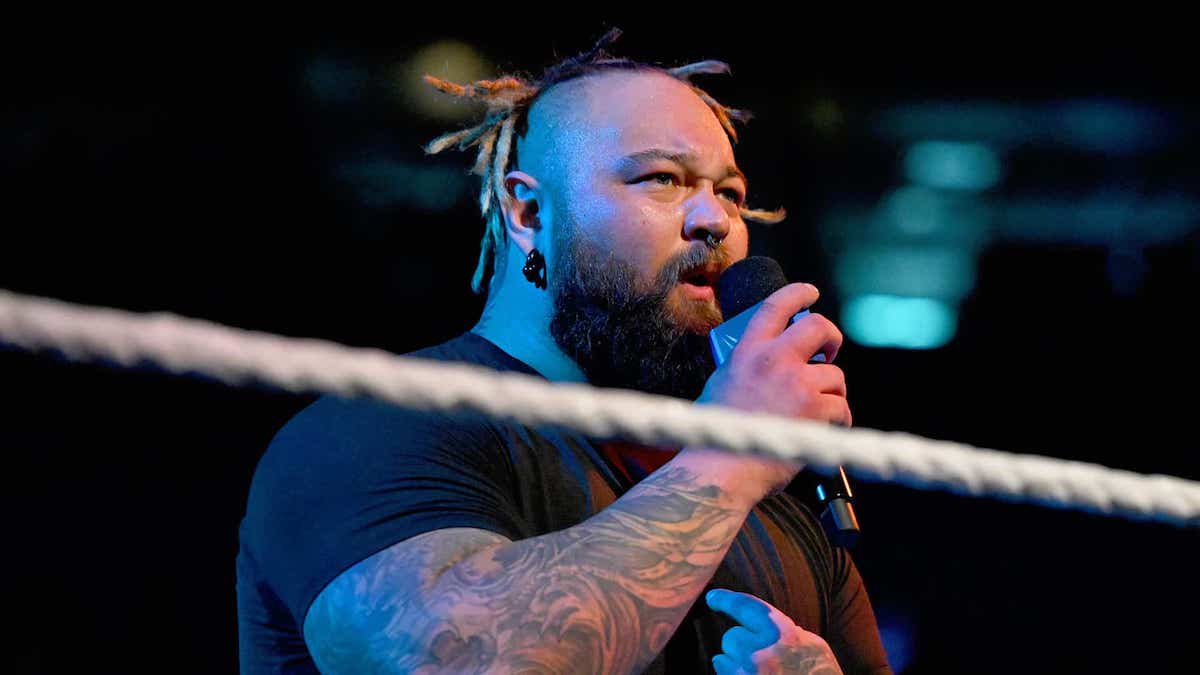 In the program of this episode of WWE SmackDown from October 14, 2022 live from New Orleans, the return of Bray Wyatt in the blue brand, Ricochet, Sheamus, Solo Sikoa and Karrion Kross in a 4-Way for the place of challenger to the Intercontinental title and Sami Zayn vs. Kofi Kingston.

The episode begins with… a car accident in the arena parking lot. Drew McIntyre obviously (deliberately) crashed Karrion Kross’ car and then went to give him some mandals. There is still little security in WWE parking lots.

Everyone loves Sami Zayn (except Jey)

The show kicks off in earnest with the match between Sami Zayn and Kofi Kingston. Backstage before the match, Sami Zayn and Jey Uso discuss what happened on RAW, when Roman Reigns calls to set the record straight with Jey.

Sami Zayn defeated Kofi Kingston by pinfall with a roll up, countering another roll up from Kingston helped by Jey Uso.

Behind the scenes, Rey Mysterio finds Triple H to tell him that he can no longer take what is happening with his son, and that although he loves WWE, he has decided to leave. Triple H asks him to go to his office to reconsider his decision. He has an idea.

Damage CTRL breaks up an argument between Raquel Rodriguez, Shotzi and Roxanne Perez (bypassing SmackDown) and Bayley doesn’t like hearing from Perez that she’s in the middle of a losing streak. She challenges the three wrestlers to a tag team match.

Braun Strowman to battu James Maverick and Brian Thomas when falling while powerbomb one on the other.

There is clearly no more separation between the brands, as Omos and MVP make their entrance after the match. MVP takes the microphone to tell Strowman that he looks normal next to the monster that is Omos. A rivalry between the two giants seems to start here.

Sami Zayn, Jey Uso, and Solo Sikoa discuss the match that Zayn won at the beginning of the show. Jey Uso wants to take credit for Zayn’s victory, but Zayn thinks he won it all by himself. Uso asks Sikoa to support him, but Sikoa says that he didn’t see Uso’s intervention, he was looking at Sami Zayn. He also says that he is focusing on the Fatal 4-Way that awaits him at the end of the episode.

L.A. Knight is back

L.A. Knight hit her Mansoor when landing with his BFT.

LA Knight will explain after the match who didn’t win the match to look good, he did it to send a message to the SmackDown locker room.

The duos of Legacy Del Fantasma (Cruz Del Toro and Joaquin Wilde) and Hit Raw (Ashante Adonis and Top Dolla) face off in the next match, but don’t wait for the match to start to face each other. The two teams will battle for several minutes before the game begins.

In an interview, Sonya Deville mocks Liv Morgan and her loss at Extreme Rules. Morgan reacts quickly and attacks Deville quite violently, going as far away from her as placing her on a table and carrying a senton on her to go through the table. Liv Morgan is no longer here to fool around.

The final match of this episode is a Fatal 4-Way in which Sheamus, Ricochet, Solo Sikoa and Karrion Kross must face each other for the title challenger to Gunther’s Intercontinental Championship. But Kross, violently attacked by Drew McIntyre at the beginning of the episode, is unable to participate in the match.

Finally it will be Rey Mysterio who, an hour before he wanted to leave WWE, replaces Karrion Kross. Obviously, Triple H has managed to convince him to stay to join SmackDown and offer himself a spot as a challenger for the Intercontinental title.

Rey Mysterio was defeated by Sheamus, Ricochet and Solo Sikoa by pinfall with a 619 and a Frog Splash on Mysterio.

Rey Mysterio is therefore a challenger for the title of Intercontinental champion. Mysterio, therefore, would rather take the risk of getting his ribs broken by Gunther than take on his son. We still don’t know if this is a good thing or not.

Read also: WWE interested in the return of Mia Yim

As expected, the episode ends with the return of Bray Wyatt, the real one, not reruns of Extreme Rules. The entrance through the door seems to be part of the new trick. His new theme song will not leave you indifferent, “Shatter” by Code Orange.

Bray Wyatt gets into the ring. Or maybe Windham Rotunda. He tells us that we are dealing with the real version of him, the one we were never introduced to. He has things to tell us about the last year he lived. “I lost a lot of things, I lost my career, I lost two people close to me, I lost my way. I got to a point where I felt like everything I was doing was meaningless, that everyone didn’t care what I was doing. But I was wrong. » he says as the audience cheers.

“Once I was done feeling sorry for myself, I went back to real life. People were saying “Thank you Bray” and wondering when he was coming back. Some came to me and thanked me because when they were in need, when they had lost their loved ones and their self-confidence, when they were weak and vulnerable, they told me that they had heard my words and those words had saved their lives. . . »

Bray Wyatt then thanks the fans who he claims saved his life when he himself was weak, vulnerable and depressed. “Thank you, you saved my life, you didn’t leave me alone, every time I wanted to run away and hide, you found me. »

Suddenly, Bray Wyatt is interrupted by a man wearing the mask Wyatt wore when he returned to Extreme Rules, visible in a blurry image. ” Come with me. Your life is over. You have no idea who you are dealing with. But you will know. »

This is a very interesting segment. And disturbing. Bray Wyatt seems to take us to the field of the guy who wants to be true and sincere with everyone, with the fans, but who gets caught up in his creation, his demons… Death itself? We don’t know where Bray Wyatt is taking us, but we are following him.